(159 products available)
All ResultsDelhiMumbaiBengaluruChennaiHyderabadKolkataAmbala CanttAmbalaPanchkulaAhmedabad
✖
Loading...
By
inq_stage3...................
Thank You
Your requirement has been submitted
✖
View Supplier Number, It's Free 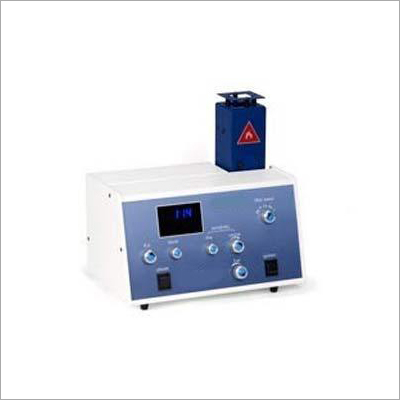 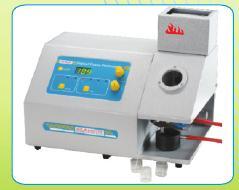 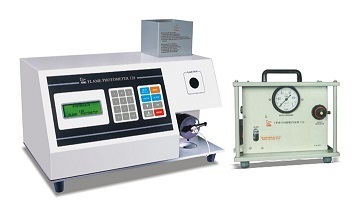 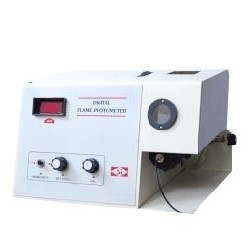 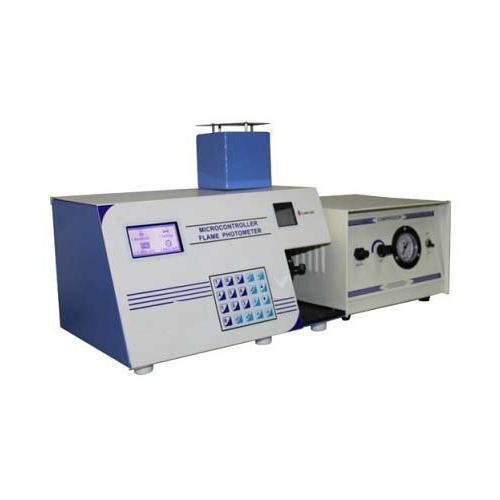 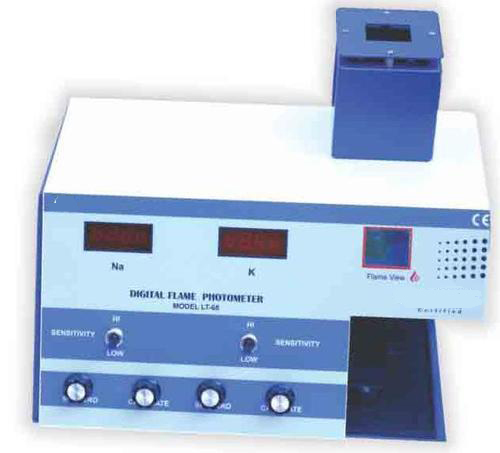 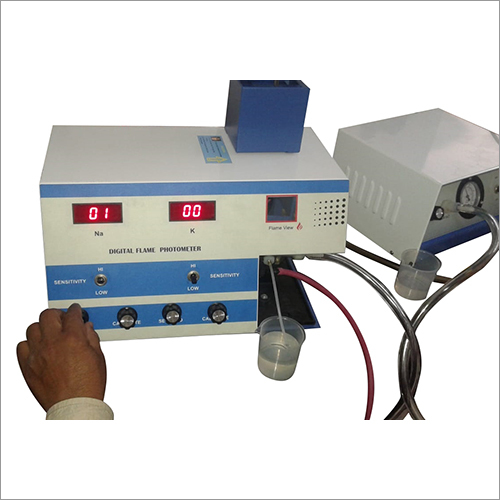 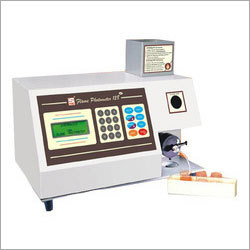 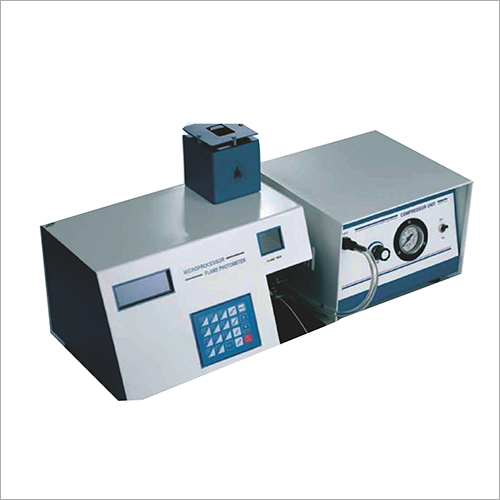 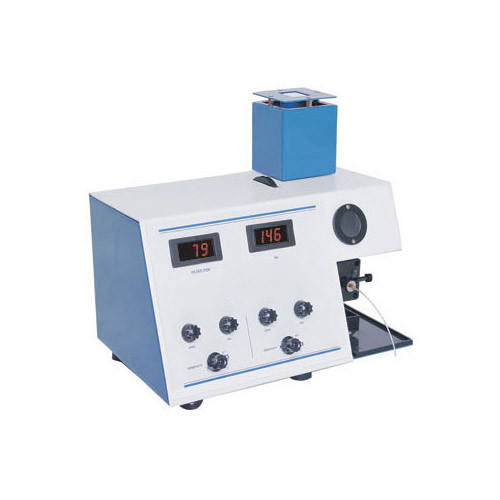 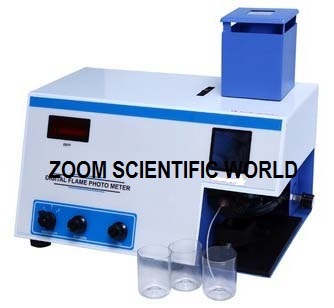 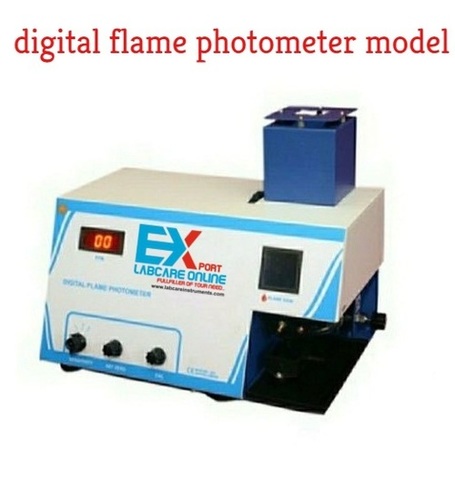 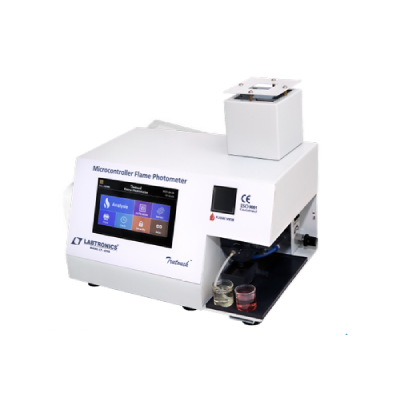 A Flame Photometer is to detect the electromagnetic radiation generated by flames. To detect the amounts of radiation, flame photometers use the principle of atomic excitation. And de-excitation followed by light emission (including K, Na, Li, Ca, and Ba). The light emission intensity is directly proportional to the number of atoms of that type present in the sample across species ranges. It is a subfield of atomic spectroscopy known as flame atomic emission spectroscopy. This measurement technique is beneficial as an alternative to colorimetric photometry for elements that do not generate colored products, such as sodium. Although not as widely utilized as it once was, Flame photometry nonetheless offers a variety of industrial and therapeutic uses.

However, the clinical models feature in-built linearizer circuitry that allows sodium and potassium readings to present in mmol/l, which requires its principal role of monitoring these levels in plasma.

Flame photometers may detect emissions from several atoms simultaneously; however, they cannot measure all of them simultaneously. Single and dual-channel instruments are the most popular, and the nomenclature refers to the number of ions that may measure simultaneously.

The capacity to estimate two parameters concurrently without re-calibrating the instrument is an advantage of dual-channel devices. When measuring a new parameter in a single channeled model, you must re-calibrate. The basic single-channeled variants, on the other hand, are less expensive.

Buyers looking forward to getting the best deals may check the available designs and technical specifications of Flame Photometer. The photometer is known for its compact design, excellent working capability, accurate results, high durability, and low maintenance needs. Buyers can connect with one of the sellers registered here and avail of the best deals here at the most reasonable prices.

What is the flame photometer's operating principle?

In theory, it is a controlled flame test in which the intensity of the flame color is measured using photoelectric electronics. The power of the paint will determine by the amount of energy received by the atoms that were sufficient to vaporize them. At a consistent pace, the sample delivers into the flame.

What kind of gas is helpful in a flame photometer?

What's the difference between a flame photometer and a spectrophotometer?

What exactly does the word "flame photometer" mean?

This apparatus was given the name Flame photometer. The flame photometer concept measures the intensity of emitted light when metal puts into the flame.

What is the purpose of using a flame photometer at a hospital?

Flame photometry is one of the earliest direct potentiometric techniques for measuring sodium, potassium, and lithium contents in blood and urine samples.

What are the Flame Photometry prerequisites?

Flame photometry is only helpful for quickly exciting components and does not need very high temperatures (Na, K, Li, and Ca are the most widely determined atoms by this technique).

What kind of burner is helpful to power AAS?

“ During the five years of our cooperation, tradeindia service attitude and professionalism have reassured me. The Indian market has always been a market that we value. Through the opening of tradeindia, our company has received a large number of inquiries, and the quality and quantity of inquiries are increasing in an orderly manner, as are the transaction customers. When we encounter problems, you will also answer patiently, help me solve problems, and the results are remarkable, I am very moved. We thank you tradeindia for your service and your support, hope we continue to cooperate happily, and wish you all the best in your work.

“We are associated with tradeindia from last 10 years and this platform helped us to improve and grow our business, branding and promotion. I am getting good business and I expect the same in the future.

“I have just connected with the tradeindia from last few Years, it is very good B2B platform to promote our products and services. So far my experience is good with tradeindia.com and Team.

“We have been member of tradeindia.com and receiving inquiries. Further we are expecting more support from the team of tradeindia. Hoping for good service and support in future.

“We are associated with tradeindia.com since 2 to 3 years. Tradeindia is a very good B2B portal as long as supported me for a google presence and generated business and trade leads from the reference of the customer.

“We received very good inquiries and business through tradeindia.

“I am very happy with the way CRM team talk to me and solved by most of the queries on-time. I wish Tradeindia all the best.

“ We are associated with tradeindia from since 12 years and good inquiry comes from tradeindia portal. We are very much happy for the service provided by tradeindia team.

“Our company has been a member of tradeindia since many years. We are happy with the services provided by tradeindia to promote our products to customers all over the world. It has helped us to increase our visibility and subsequently in new queries and business. The team from tradeindia are also constantly interacting with us to help and improve our online Marketing. Thank you tradeindia team and keep us your service.

“We are associated with tradeindia for last one year and we had a very good business from tradeindia. They helped us in our promotion, augment sales and inquiries. Tradeindia is an excellent platform for small and medium companies. We are happy with tradeindia and recommend others to join.